This creature has survived more than 30 ice ages in Antarctica
Scientific American, April 2020

Byron Adams and Ian Hogg peered out the windows of their helicopter as it glided over the barren slopes of the Transantarctic Mountains, 600 kilometers from the South Pole. Their eyes flitted across ledges and cliffs below as they looked for landmarks that another scientist — now dead — had scribbled down 54 years before. In following the dead man’s directions, Adams and Hogg were searching one of the southernmost-dwelling animals on Earth. The creature was discovered in 1964, but no one had seen it since… [READ MORE]

Meet the endoterrestrials
The Atlantic, 17 October 2018

Alexis Templeton remembers January 12, 2014, as the day the water exploded. A sturdy Pyrex bottle, sealed tight and filled with water, burst like a balloon. Templeton had just guided her Land Cruiser across the bumpy, rock-strewn floor of Wadi Lawayni, an arid valley that cuts through the mountains of Oman. She parked beside a concrete platform that marked a recently drilled water well. She uncapped the well and lowered a bottle 850 feet below the surface, hoping to collect some water… [READ MORE] 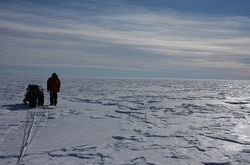 On December 1, 2012, a red and white Twin Otter plane skimmed low over Pine Island Ice Shelf, on the remote coast of West Antarctica. The pilot dragged the plane’s skis over the intended landing spot, then lifted off and circled back to see if this had uncovered any crevasses hidden under the snow. Once the plane landed a single person disembarked. Roped in a climbing harness, he probed the snow with an eight-foot rod, looking for buried crevasses that might swallow a person… [READ MORE]

From his window in the airplane, David Kingsmill could barely see the wildfire two miles below, on the ground; it was dwarfed by the dark thing that towered above. The fire’s plume of smoke billowed 35,000 feet into the sky, punching into the stratosphere with such force that a downy white pileus cloud coalesced on its underside like a bruise. The plume rotated, seeming to pulse of its own volition, like a chthonic spirit rising over the ashes of the forest that no longer imprisoned it. “It looked,” says Kingsmill, “like a nuclear bomb.” Undaunted, he and the pilot decided to do what no research aircraft had done: Fly directly through the plume… [READ MORE]
[2017 AAAS Kavli Science Journalism Gold Award for Excellence in Science Writing, Magazine Category.] 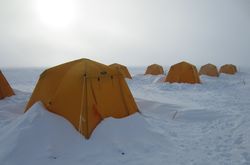 Antarctic Dreams: Learning what you’re made of at the bottom of the world
Virginia Quarterly Review, Spring 2016

One day in January 2013, on a remote stretch of the West Antarctic Ice Sheet, Dennis Duling and his six crewmates were busy crawling and climbing over a series of shipping containers lined up on the snow. They were performing last-minute repairs on their machine, a custom built monstrosity called a hot-water drill. Using it, they planned to melt a hole, half a mile through the West Antarctic Ice Sheet, so scientists could get their first view of the world beneath the ice. This would mark a milestone of scientific exploration, on par with landing a probe for the first time on Mars… [READ MORE]